Episode 9: Roadmap to a Flu-Free Future

The Influenza Vaccines R&D Roadmap Initiative: a collaborative effort to reimagine and transform the vaccine research, development, and delivery ecosystem to reduce the seasonal flu burden and protect against pandemic threats.

A New Roadmap Points the Way to Better Influenza Vaccines

When COVID-19 struck, the vaccine R&D ecosystem was poised for quick response, thanks in part to decades of work toward improving seasonal influenza vaccines and in pursuit of the “holy grail” of a universal influenza vaccine (UIV): one that provides lifelong or multi-year protection against a broad spectrum of influenza strains. Yet significant though their achievements have been, influenza vaccine researchers and developers and their funders have lacked a global strategy to guide their efforts and fuel innovation.

To meet the crucial need for coordination, an international collaborative effort has launched the Influenza Vaccines R&D Roadmap (IVR) Initiative: a decade-long effort to prioritize R&D activities to improve seasonal influenza vaccines and develop durable and broadly protective or universal influenza vaccines.  On September 30, 2021, the Initiative released the IVR, a document that identifies key areas for future influenza R&D and plots their advancement, milestone by milestone, toward strategic goals. 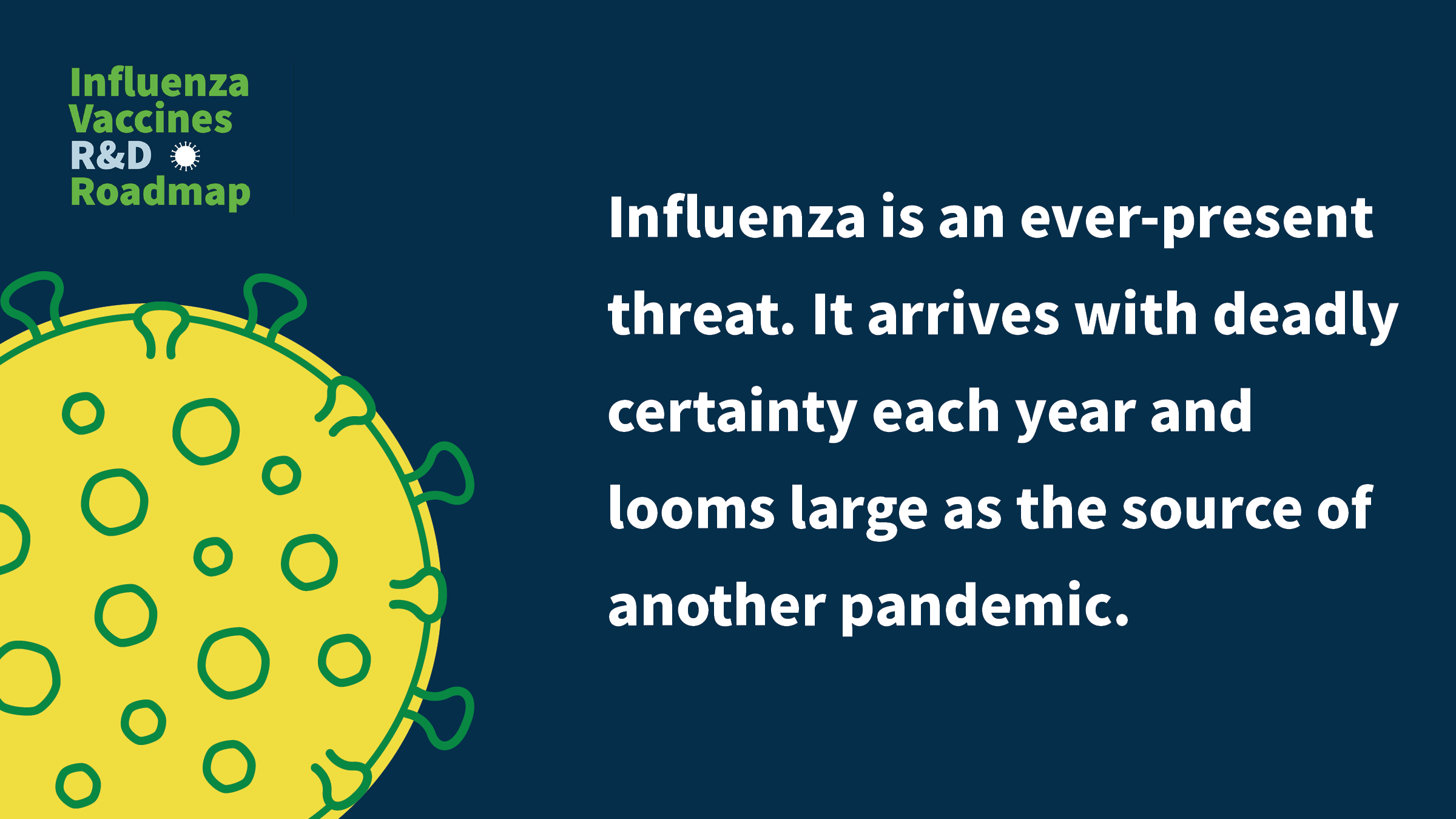 The “R&D roadmap” approach has proved fruitful in addressing other infectious disease threats, beginning with the West African Ebola epidemic 2014-15.  Thereafter, the World Health Organization (WHO) developed a series of such roadmaps for priority pathogens of concern, including for the coronaviruses that cause SARS, COVID-19 and MERS; for Zika and Lassa fever viruses; and for any unknown pathogen, denoted “Disease X. In the case of influenza, the WHO has adopted a strategy that encompasses control and response as well as prevention and which acknowledges the need for effective vaccines that the IVR aims specifically to address.

This effort is crucial, because despite the existence of vaccines and treatments for influenza, every year it kills up to 650,000 people and sickens some five million.  Flu also poses an ever-present pandemic threat. Experts estimate that a severe influenza pandemic could kill as many as 30 million people within six months—more than six times the estimated toll of COVID-19 to date.

Recognizing the urgency of addressing both the seasonal burden and the pandemic threat of influenza, the Center for Infectious Disease Research and Policy (CIDRAP) at the University of Minnesota oversaw creation of the IVR with funding from the Wellcome Trust, a sponsor of R&D roadmaps for WHO priority pathogens. These partners envisioned a strategic planning tool that could facilitate influenza vaccine R&D and coordinate funding to improve seasonal vaccines and pursue UIVs. An international group of stakeholders and experts representing multiple scientific disciplines in both public and private sectors engaged in developing and refining the IVR and will participate in its ongoing revision through the IVR Initiative.

One such contributor—Rajeev Venkayya, president of Global Vaccines at Takeda Pharmaceutical—defines the IVR as “a comprehensive overview of everything that needs to be done to get us to better influenza vaccines.” In our latest video, Roadmap to a Flu-Free Future, he and fellow influenza experts describe how the IVR can unify and power influenza vaccine R&D over the next decade. The ninth episode in the Influenzer Initiative’s documentary series also features William Ampofo, Cheryl Cohen, Sarah Gilbert, Margaret Hamburg, Jonathan Heeney, Gagangdeep Kang, Florian Krammer, John Lim, Andrew Lo, John McCauley, Michael Osterholm, Rajeev Venkayya and Charlie Weller. 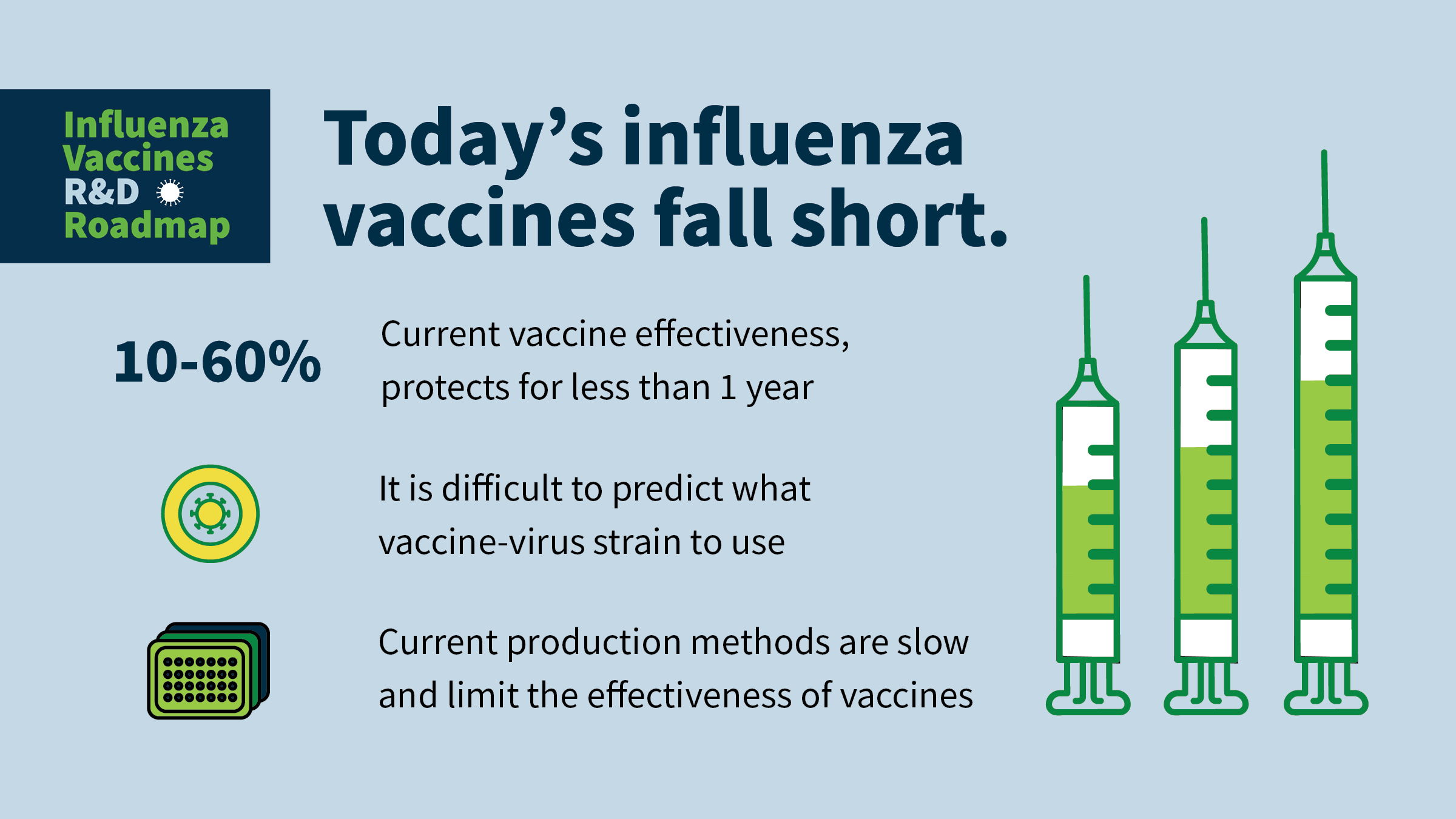 Significant obstacles must be overcome to improve influenza vaccines, according to Michael Osterholm, CIDRAP’s director. “The first is just coordination,” he says. “We have many different activities going on around the world at the very basic level of research and development at the bench, all the way to…how [vaccines are] approved, licensed, manufactured, and distributed.” Second, multiple scientific questions must be resolved through focused research. As promising vaccine candidates emerge, a third barrier awaits: the so-called “Valley of Death” between publicly funded R&D and late-stage development, including costly clinical trials—a risky proposition for the pharmaceutical companies that pay for them. The IVR offers tools to facilitate this process.  All of these challenges are particularly acute now that COVID-19 vaccines have taken center stage. But Osterholm warns that a flu pandemic could be just as bad if not worse than COVID-19, necessitating continued efforts to improve current influenza vaccines.

The IVR defines and prioritizes key areas for future research and the technological advancements necessary for progress toward better influenza vaccines. This framework encourages synergy among the numerous and complex elements of the influenza vaccine R&D ecosystem and indicates where investments must be made to support innovation. “Where the roadmap delivers a lot of value is in bringing…[formerly] fragmented efforts into alignment, and into some kind of structure,” says Patrick Tippoo, executive director of the African Vaccine Manufacturing Initiative. That includes balancing the improvement of existing influenza vaccines with the pursuit of a UIV. There’s a potential tension between these two approaches, notes Charlie Weller, director of the Wellcome Trust’s vaccines program, but she adds that the IVR Initiative aims to “enable both of these approaches, neither at the expense of the other.” Several contributors emphasize the IVR’s ability to guide funding agencies toward more effective investment in influenza vaccine R&D and to improve coordination of key actors.  The hope is that the IVR could spark new funding collaborations while preventing duplication, thereby maximizing return on investment.

Informed by an international and multi-sectorial group of experts, the IVR Initiative aspires to produce inclusive, worldwide consensus on priorities for influenza vaccine R&D and collaboration in achieving them. The IVR will aid in identifying region- and country-specific issues, as well as global ones. For example, as the current pandemic has demonstrated, delivery of vaccines that require significant cold-chain infrastructure presents a major barrier to access in low- and middle-income countries. Addressing that issue must be part of the innovation process for influenza vaccines, asserts William Ampofo, of the University of Ghana’s National Influenza Center. “A universal influenza vaccine will truly not be universal unless it’s able to fully protect against influenza pathogens,” he says, and until it’s available to every person.

Over the next decade, progress toward IVR goals and milestones will be regularly reviewed, and the framework renewed as the research and policy landscape evolves. The Initiative doesn’t expect that every goal and milestone will be met; rather, the IVR is designed as a living document advising allocation of R&D resources in response to real-time priorities. This initial version will be continuously updated as new information, research, and policy emerges.  Weller defines success for the IVR as its acceptance and engagement among a broad audience versus the number of milestones achieved.  “We want it to be used and useful by the research community to guide the research focus,” she insisted.

As an influenza vaccine R&D stakeholder and IVR steering committee member, the Influenzer Initiative welcomes the timely debut of the IVR and enthusiastically supports the IVR Initiative’s efforts to transform the influenza vaccine R&D ecosystem.  We especially value the IVR’s power to guide and inspire the engagement of new scientific tools, talent, and investment in driving influenza vaccine breakthroughs.  Arriving in the midst of the phenomenal basic science effort that has produced multiple COVID-19 vaccines, the IVR is poised to spark and sustain similar innovation in influenza vaccine R&D. “New ideas, new concepts, new tools, new technologies … [from the COVID era] could be then used for vaccines for other diseases like influenza,” predicts immunologist Edward Holmes. The IVR provides a dynamic blueprint for making that happen. 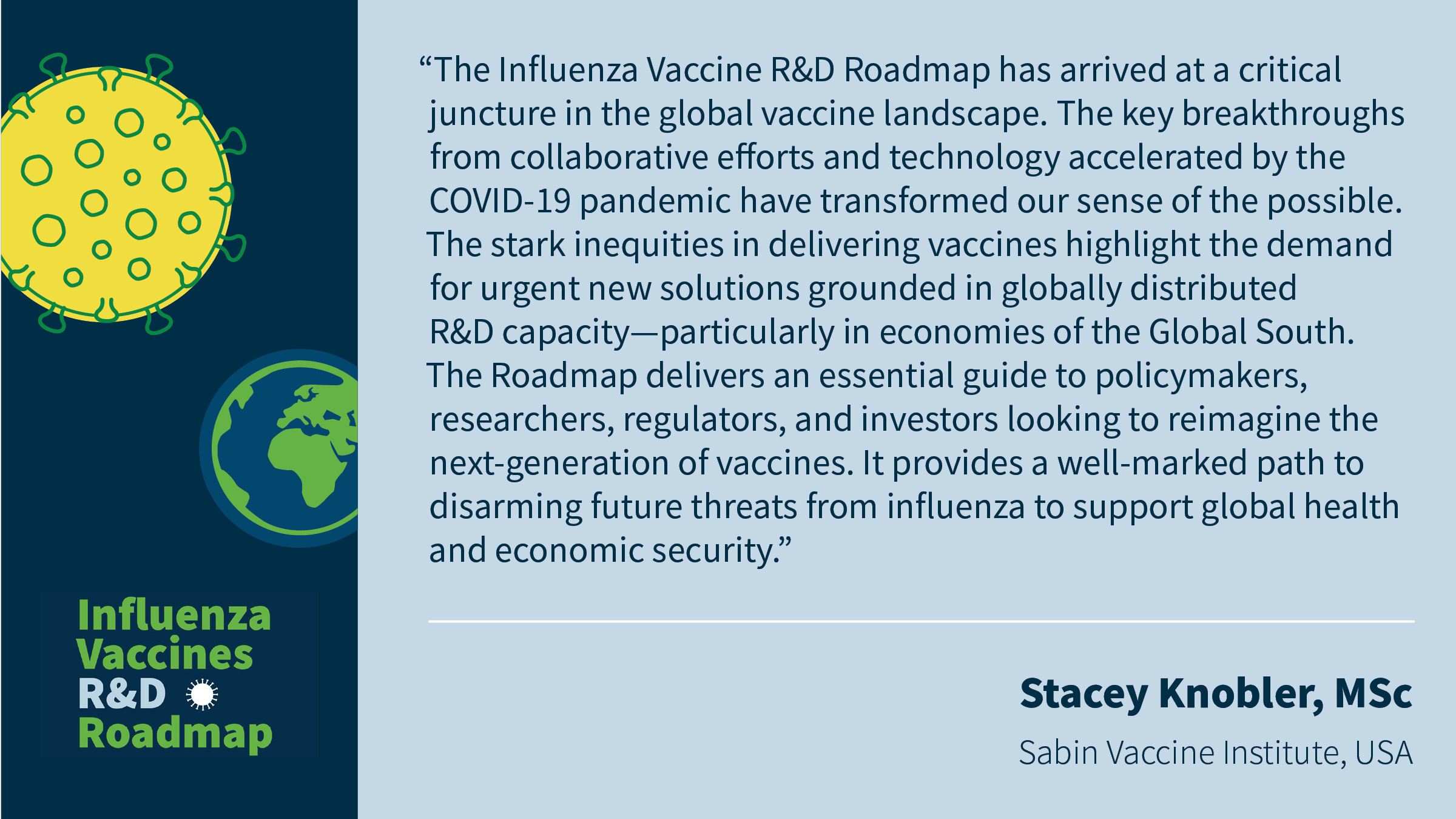 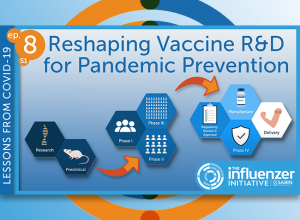 The vaccine R&D community moved quickly to fight the COVID-19 emergency. But can it remake itself in ‘peacetime’ to stop the next pandemic threat?