Articles featured in October 4th’s Flu News Day discuss the link between a lowered risk of stroke and receiving a flu shot, ongoing updates on universal influenza vaccine development and more. Read more to catch up on the latest in influenza news and funding. 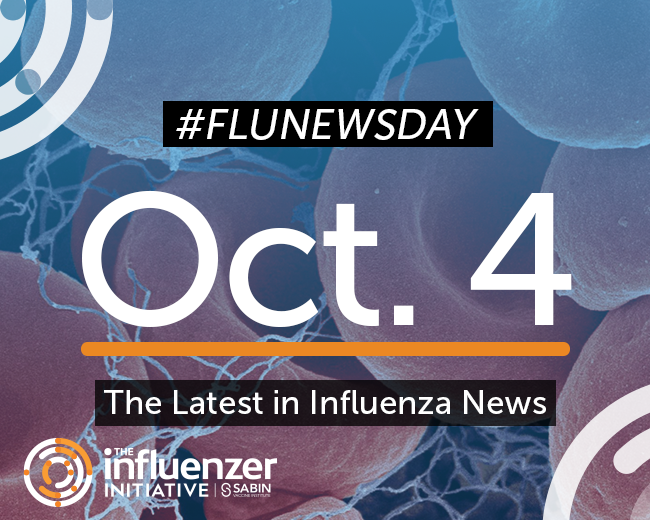 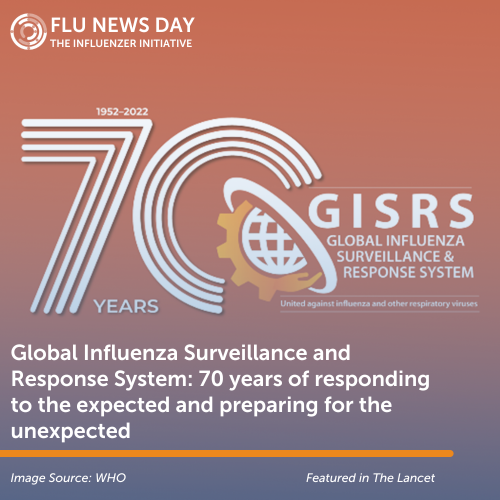 Global Influenza Surveillance and Response System: 70 years of responding to the expected and preparing for the unexpected

In 1948, recognizing the need for coordinated laboratory surveillance of influenza, the World Health Organization launched the Global Influenza Surveillance and Response System (GISRS). Since then, the program has played a vital role in surveillance of seasonal influenza pandemics, pandemic threats caused by avian and other animal influenza viruses, and other unexpected influenza pandemics. More recently it has also played a central role in surveillance of novel coronaviruses.  Although initially established to monitor influenza, the GISRS program has been able to identify emerging pathogens including SARS-CoV in 2003, MERS-CoV in 2020 and contribute to COVID-19 response by adapting existing influenza systems to support COVID-19 testing and reporting. The GISRS currently monitors influenza and SARS-CoV-2 viruses simultaneously in over 100 countries. Currently, WHO member states are considering expanding GISRS to integrate influenza, SARS-CoV-2, respiratory syncytial virus, and possibly other respiratory viruses by further integrating laboratory and epidemiological surveillance, sentinel and non-sentinel surveillance, routine and outbreak surveillance, data generated from point-of-care tests, and digital tools for participatory surveillance. Read the entire article here to learn more about WHO’s success with the GISRS program especially during COVID-19 pandemic response and monitoring. 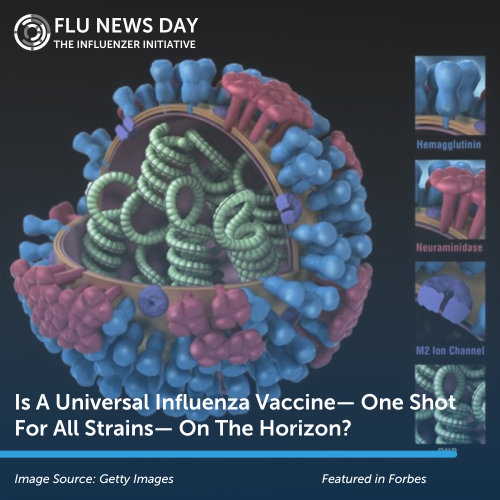 Is A Universal Influenza Vaccine— One Shot For All Strains— On The Horizon?

Current influenza vaccines require early administration to keep pace with viral mutations. But over the last decade, there has been substantial efforts to develop a universal flu vaccine that can neutralize many different strains across both major influenza types including as-yet undiscovered strains. Researchers have found a new vaccine candidate that combines two influenza virus targets: — M2e which helps untether the viral RNA from the surrounding viral membrane, and the stem portion of influenza surface protein hemagglutinin (HA2) which creates the opening through which the RNA can then enter the host cell cytoplasm. The antibodies that bind to and block either of these proteins can impair viral replication. The new vaccine candidate holds promise as it targets those viral regions that only very rarely mutate. Read more about the science behind the discovery of the new influenza vaccine candidate, and the people involved in it here. 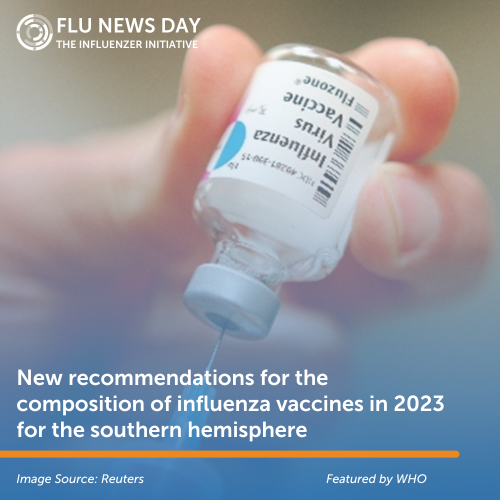 The WHO announced the recommended viral composition of influenza vaccines for the 2023 southern hemisphere influenza season.  The periodic update of viruses contained in influenza would allow to for vaccines to be effective against constantly evolving nature of influenza viruses and allow manufacturers to develop, produce, and license influenza vaccines for the following influenza season. The recommendation is based experts from WHO Collaborating Centers and WHO Essential Regulatory Laboratories that analyze virus surveillance data through the Global Influenza Surveillance and Response System (or GISRS) that analyze data from 150 laboratories across 127 countries. Read the article here to learn more about the research behind developing the new vaccine composition. 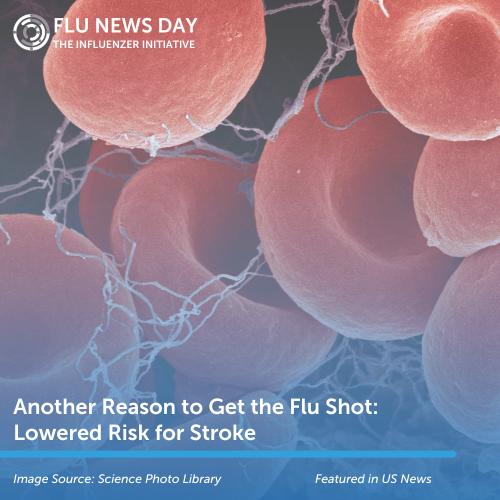 Another Reason to Get the Flu Shot: Lowered Risk for Stroke

Researchers in Spain found that among nearly 86,000 middle-aged and older adults, the risk of ischemic stroke was lower among those who go their annual flu shot. Ischemic stroke is caused by a blood clot that diminishes blood flow to the brain. Vaccinates people were 12% less likely suffer a stroke compared to unvaccinated counterparts. Close to a billion people take the flu vaccine each year; a modest protective effect from vaccination could translate to a substantial reduction in morbidity and mortality due to stroke. The cohort of people studies were aged between 40 to 99 whose medical records were part of a Spanish primary care database. Learn more about the study findings and methods here. 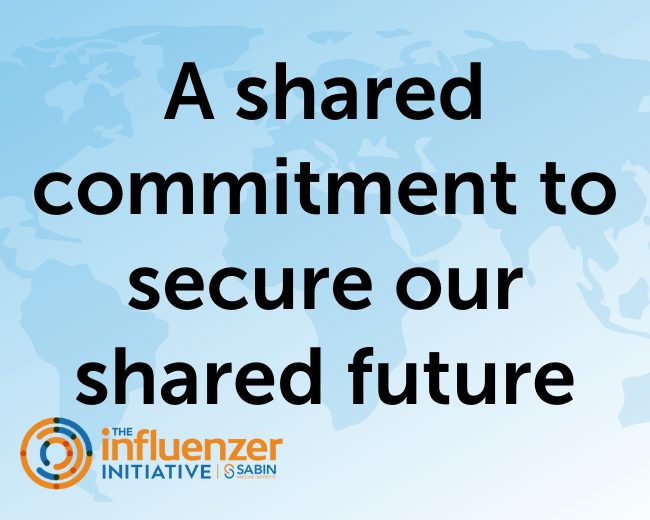 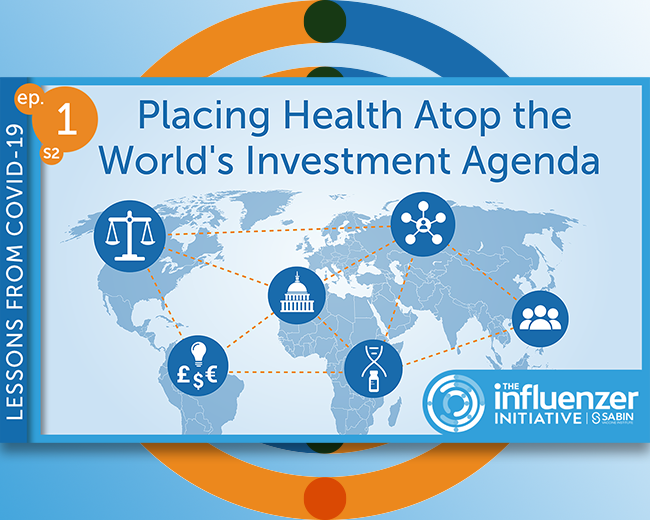 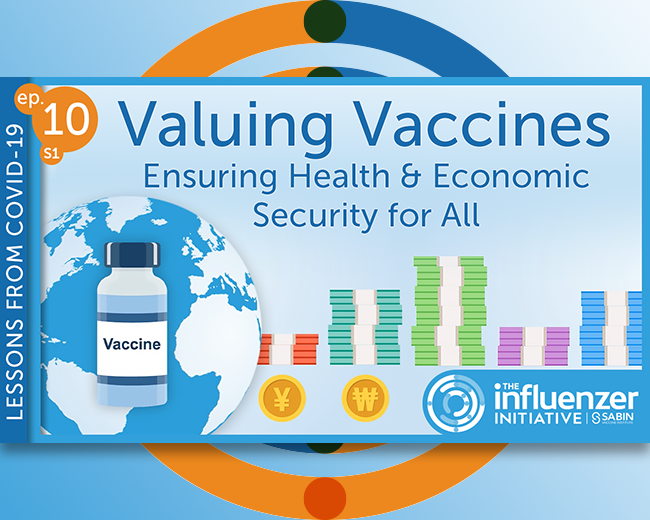