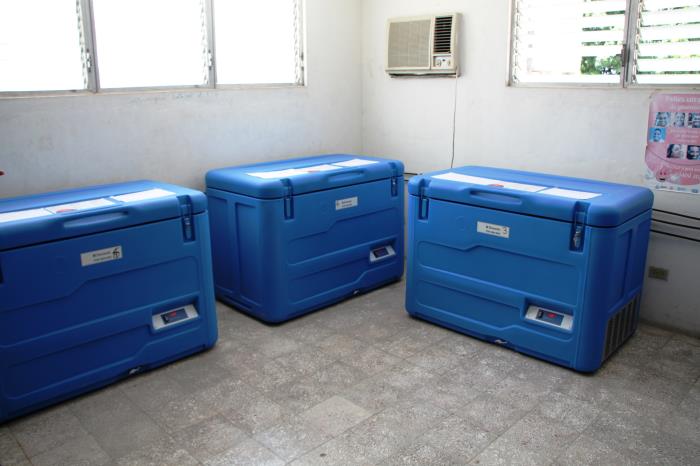 Image credit: CDC Public Health Image Library
Captured in Southern Haiti in 2014, in the commune of Jacmel, inside a building at the Jacmel Depot, this image depicted a nondescript room in which three, rectangular-shaped Dometic TCW 3000 SDD solar powered, blue-colored vaccine coolers were operating.

Conference Announcement: The Eighth ESWI Influenza Conference is December 4th to 7th, 2021. Join colleagues and peers from around the world in Salzburg for the largest conference dedicated to influenza, RSV disease and Covid-19. Register here. Abstracts are due September 3, 2021; submit abstracts here.

After reviewing eight years of surveillance data for swine influenza A (swIAV) viruses in Danish pigs, scientists identified 17 different circulating genotypes, six of which were novel reassortants harboring seasonal IAV gene segments from humans. Substantial genetic drift was observed through phylogenetic analysis. Positive selection occurred mostly hemagglutinin (HA) antigenic sites, meaning there was selection of variants at specific sites to give the virus an evolutionary advantage. The results demonstrate the importance of a One Health approach to pandemic preparedness, including influenza surveillance for not only humans but for pigs and other animals, to identify strains with pandemic potential across species.

2. Racial disparities in influenza immunization during pregnancy in the United States: A narrative review of the evidence for disparities and potential interventions
Callahan et al., Vaccine / July 24, 2021

Scientists reviewed over a decade of data on racial disparities in influenza immunization during pregnancy and interventions to improve uptake in the United States. Black women were found to consistently have the lowest rate of influenza immunization during pregnancy, a trend contributed to by experiences of medical racism. Health provider recommendations for the vaccine were associated with greater vaccine uptake and black women reported lower rates of provider offer or referral of flu vaccines during pregnancy. Successful interventions found to improve uptake included group prenatal care and culturally competent educational messages. A significant barrier to increasing vaccination rates among Black individuals and other historically marginalized and underserved communities are structural inequities in access to the health system, such as income or lack of insurance. The authors call for more research on effective interventions to address these disparities, with a patient-centered emphasis on cultural humility and building rapport.

mRNA technology has been critical in fighting COVID-19; now vaccine makers want to replicate that success in the yearly fight against influenza. While there are still areas for improvement with the platform, such as cold storage, a successful mRNA influenza vaccine would be a desirable alternative. Compared to traditional egg-based vaccines, the genetic-based platform is nimble with flexible manufacturing timelines. Faster timelines from development to distribution can also reduce the risk risk of strain mismatch between selected and circulating strains. The modularization of mRNA vaccine design would also allow for one manufacturing plant to produce vaccines against multiple viruses, leading to long-term savings in costs.

India reported its first avian influenza case in the city of Gurugram, in a child with underlying health conditions. Follow-up testing at the National Institute of Virology revealed coinfection with both Influenza A/H5 and Influenza B/Victoria, but subtyping for Influenza A yielded inconclusive results. Sample collection, genetic sequencing and virus isolation are under way. No cases of suspected avian flu in birds have been reported in the area.

A freeze-dried influenza A vaccine was developed using nanoparticle technology, with conserved M2e proteins coupled to gold nanoparticles, with a toll-like receptor 9 agonist (CpG) adjuvant. This universal influenza vaccine candidate was found to be thermally stable for extended time periods in its lyophilized dry powder form, confirmed by absorption spectra. Reconstitution in water was successful without aggregation. After reconstitution, intranasal and intramuscular vaccination in ferrets induced M2e-specific antibodies and protected against lethal challenge.

Scientists examined how chromatin dynamics and epigenetic control in the nucleus contributes to influenza infection and immunity, focusing on a specific Histone H4 methylase, Suv4–20h2. Unlike the HIV retrovirus, influenza’s RNA genome does not directly integrate into the host’s chromatin, but the influenza replicates in the nucleus and exploits host machinery to produce viral proteins and genetic material. Review of literature confirmed the interaction of epigenetic mechanisms and chromatin changes with viral replication and infection.

Scientists developed a simple mechanistic model capable of quantifying the impact of climate drivers, such as humidity and temperature, on influenza transmission in tropical and subtropical regions. The model was used on the subtropical city of Hong Kong, a city with diverse influenza activity. Results indicate the effect of climate conditions is different for tropical and sub-tropical regions, compared temperate regions, and models specific to those respective regions are required to reproduce accurate transmission patterns. Scientists hope this model can be used to improve forecasting of influenza in the tropics and subtropics in the future.