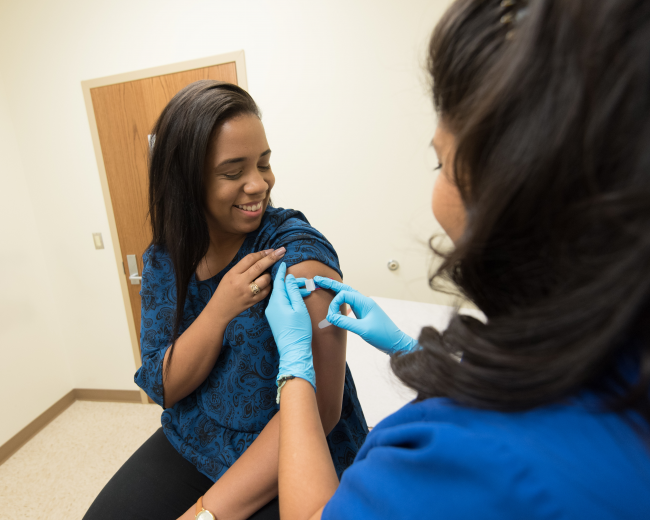 Announcement: Join the launch of the Influenza Vaccines R&D Roadmap.
On September 30, CIDRAP and Wellcome will be hosting a virtual event for the launch of the Influenza Vaccines Research and Development (R&D) Roadmap. Register to learn more about efforts to accelerate the development of improved seasonal and mitigate the impact of future influenza pandemics.

The U.S. Centers for Disease Control and Prevention made updated recommendations regarding seasonal influenza vaccines: vaccines against SARS-CoV-2 and influenza can be administered simultaneously, compared to previous recommendations about spacing the two vaccines by two weeks. Experts are not concerned about the new recommendation; the MMR vaccine is one example of an efficacious vaccine that stimulates a protective immune response against three viruses: measles, mumps, and rubella. Furthermore, preventing both influenza and COVID-19 through vaccination provides the opportunity to reduce the burden on the health system.

This article examines the changes in influenza antigenic evolution and cases during the COVID-19 Pandemic. While influenza normally causes substantial levels of morbidity, mortality, and economic loss, during the Pandemic its circulation has been extinguished to low levels with reduced genetic diversity. Global levels of influenza transmission have been low, however, there has been sustained, independent transmission of particular lineages in smaller regions of higher population densities. The influenza B/Yamagata lineage has not been isolated since the beginning of 2020, and its impact on flu dynamics and vaccines in temperate versus sub-tropical and tropical regions is discussed. Scientists predict that future influenza seasons will have greater severity as all-population immunity wanes, and call for a renewed focus on the development of a UIV.

A two-vaccine “prime-deploy” strategy was tested to examine if it increased the protective efficacy of an intramuscular, DNA-based universal B influenza vaccine expressing the conserved nucleoprotein (NP). The DNA UIV was first administered to prime and generate NP-specific CD8 T-cell responses. The second vaccine, administered intranasally, used a viral vector platform without an antigen with the sole purpose to recruit and “deploy” the T-cells into the lungs through triggering an innate inflammatory immune response. This is to be contrasted with “prime- boost” vaccination, a regimen involving two vaccines administered subsequently, both containing antigens. The prime-deploy strategy was found to establish lung-resident memory CD8 T-cells and improve protection against influenza B.

Scientists designed an influenza vaccine adjuvant using Bacterial Enzymatic Combinatorial Chemistry (BECC) technology. The adjuvant consisted of a lipid that has the purpose of stimulating Toll-like receptors to generate signals that initiate a downstream adaptive immune response. The adjuvant was administered with a recombinant influenza A vaccine and showed improved immune responses during both homologous and heterologous challenge in mice, compared to the known Alum and PHAD adjuvants, while also showing vaccine dose-sparing capacity.

Scientists compared the immune responses to an oral, viral vectored influenza vaccine when expressing a normal versus a headless hemagglutinin (HA) in a mouse model. Mucosal vaccines, oral or intranasally, have been increasingly studied for their practicality and their potential to induce robust T-cell responses and improve vaccine efficacy. The adenovirus-vectored vaccine expressing normal HA was found to provide protection against homologous challenge while eliciting a T-cell response.